I attended Sholing Girls’ School in Southampton (England) from 1981-1985. My total recall for the whole 4 years is of about 6½ days (mostly field trips) – was it really worth all that fuss?

I have copies of all my end of year reports. In hindsight they are at best very telling, and at worst, not actually about me at all.

What follows is just a summary for one year – I also have libelous comments for all the subjects inflicted for that year! 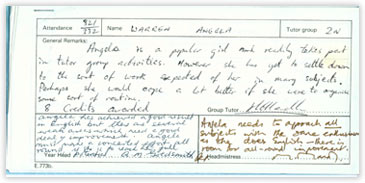 Attendance 321/332 [There’s no way my Mum would have fallen for the fake, drawn-on measles 11 times in a year – maybe I had a genuine illness!]
Name Warren, Angela
Tutor Group 2N [This would now be called Year 9, or 9th Grade]

Angela is a popular girl [Wow, really? Gee, thanks!] and readily takes part in tutor group activities. However [Why is there always a ‘however’ or a ‘but’?] she has yet to settle down to the sort of work expected of her in many subjects. Perhaps she would cope a lot better if she were to organise some sort of routine [But I LIKE the chaos and surprises that total and utter disorganisation bring. Always have, always will!] .
8 credits awarded. [Can I cash these in for a cash prize when I leave school? Sadly not! Pointless.]
Mr Handley. Group Tutor. [Was really quite plain and had a very square head, but being one of about four men in an all girls school half the class had a crush on him. Girls are stoopid.]

Angela has achieved a good result in English [Hoorah!] but [BUT!] there are several weak areas which need a good deal of improvement [i.e. absolutely everything else.]. Angela must make a concerted effort all round if she is to reach her full potential .
Ms Goldsmith. Year Head.

Angela needs to approach ALL subjects with the same enthusiasm she does English [OK! I’m getting the picture! At least I was good at something USEFUL. What happened to all the girls who were only good at one of the ‘filler’ subjects, like Latin?] – there is room for all-round improvement. [I’m thinking of having this tattooed somewhere on my body, as it seems to be a very regular motif in my life.]
Mrs Manning. Dep. Headmistress.